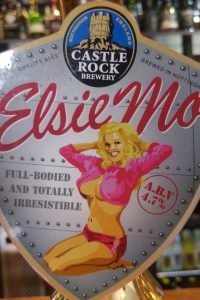 As a white male with a comfortable upbringing it might be a bit cringeworthy to hear me thumping tubs or see me approaching a soap box to speak out on behalf of others. But I can’t understand how outrageously outdated attitudes are still prevalent in 2017. Beer folk are pretty liberal types, but the prejudices and numbskullery we see elsewhere pervade our world too.

Sexism is everywhere. Turn on the TV or radio and it will only take a moment to witness it in some form. Of all the moronic ways of seeing others as different or inferior, I find sexism the most shocking, perhaps because we’re not talking about cultural or hereditary differences, but HALF THE HUMAN SPECIES.

Adverts tell us to “Get some nuts” and colleagues insist we “man up”. A short time ago Yorkies were “NOT for girls”. Where I work I’m often called a “little bitch” and men will be greeted as “ladies” – as if we should feel inferior. Sexists pass this off as “tongue in cheek” and say we take it all too seriously. They think Fosters adverts are relevant and didn’t see the harm in Page 3. They don’t see the ugly hangover of laddism and its many precursors in mainstream media.

They will argue that things have never been better for women, that Fuller’s have appointed a female Head Brewer. To suggest unfair treatment today pales in comparison to the past is not an argument at all, caveperson!

Some brewers are living in the dark ages. Flying Dog make Raging Bitch, Route 2 Brewery gave their range overtly sexual names such as Leg Spreader and Panty Peeler. What kind of redneck cretin are they targeting?

It can be less obvious. Pin ups have been given something approaching innocence and nostalgia. Castle Rock Brewery are one among many that have capitalised on this, pushing the boundaries of what ‘pin up’ means, with boobs bigger than were ever depicted on the side of bombers appearing on pump badges.

It doesn’t matter that women work in these breweries. Many women are not feminists, just as many Christians don’t forgive, or love thy neighbour. Just as I am a man and don’t shout at footballers on TV.

Alan Clark, then head of SABMiller, called for the end of such marketing in 2015 – shortly after a beer called Mouth Raper was released by Hop Valley. USING RAPE TO SELL BEER?! This argument has rolled on for years.

There is also an increasing machismo throughout the beer industry. I gravitate towards women and unthreatening men when it comes to my social group, so MEN seem strange and shocking to me. There aren’t many, but they make more noise than the rest combined. They seem to be guys in ‘craft beer’. They talk loudly about why their point of view is the one we should adopt, and their beer is the best in the world. They all but shout “I AM AN ALPHA MALE” at you. They all seem to smoke too, meaning they can’t taste beer very well. Ha! Look at me generalising and encouraging prejudice.

Still, women brewed for hundreds of years before these know-it-all dudebro morons arrived, and will likely be better tasters, as women generally are.

My point is that beer can seem like one big, lovely family. But look more closely and you see how much there is to be done. Just because women are mistreated or misrepresented to a lesser degree than in another industry/period in time/part of the world, doesn’t mean that mistreatment does not exist in our industry or is okay.